Congratulations to the winners of the 2017 Grimmys

The Society of Professional Obituary Writers honored the best writers in the field at the Grimmys Award ceremony, which was held last weekend during ObitCon 2017. Reporters and editors from all over the world submitted entries to the Grimmys Contest. And the 2017 winners are:

Best long form obit - Tom Hawthorn of The Globe and Mail (Toronto, Canada), for his obituary of Al Howie, an eccentric ultramarathoner who ran across Canada

Best obit of an ordinary Joe/Jane - Maureen O'Donnell of the Chicago Sun-Times, for her obituary of Phyllis Larson, the Turkey Talk-Line expert who rescued holiday meals

Obituary writer of the year - Linnea Crowther of Legacy.com

Each winner received a trophy shaped like a tombstone that included the society's unique Memento Mori logo, which was designed by Mairead Rosati. 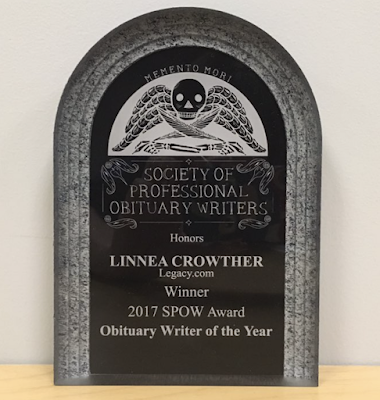 Posted by Jade Walker at 1:23 PM No comments:

The fifth conference of The Society of Professional Obituary Writers was held Oct. 13-15, 2017 at the Legacy.com offices in Evanston, Ill. If you were unable to attend, here's what you missed:

On Friday, ObitCon participants gathered for a meet and greet at Bookends and Beginnings in Evanston, Ill. Afterwards, society members enjoyed a delicious meal at Pete Miller's Seafood & Prime Steak.

On Saturday, attendees gathered at the Legacy.com offices in Evanston, Ill., and engaged in "grave discussions" about obits and obituary writing. Several guest speakers gave short talks, including Stephen Segal of Legacy.com, Adam Bernstein of The Washington Post, Susan Soper of ObitKit and Owen Youngman of Northwestern University. SPOW members also enjoyed a screening of the documentary, "Obit," followed by a discussion of the film with director Vanessa Gould.

If you missed any of these events, just hop over to Twitter and read the tweets posted under the hashtag #obitcon.

Posted by Jade Walker at 1:18 PM No comments: