By now, Obituary Forum's faithful followers and the Society of Professional Obituary Writers (SPOW) members know that the results of the People's Picks online poll have no bearing in selecting winners of the official SPOW Awards.

We feel it's important to distinguish between the two honors. That's why we did not post the People's Picks results with the official SPOW Award winners. It's not like we forgot or anything. (That's my story, and I'm sticking to it.)

Winners of the People's Picks poll are as follows:

Best body of work (long-form) by one writer, based on exactly five obits, published in 2009 in a print or online news publication. (Long-form obits have 800 words or more.): Laurence Arnold, Bloomberg News.

Best body of work (short-form) by one writer, based on exactly five obits, published in 2009 in a print or online news publication: Maureen O'Donnell, Chicago Sun-Times.

Complete list of SPOW winners is posted on the awards page of the SPOW website.
Posted by Alana Baranick at 9:10 PM No comments:

Please do not tell her what to do, or presume to speak for her.

I'm serious. Do not impugn her sex, her country, her region, or her profession, which, by the way, is journalist, not obit writer.

She's the most fun person you could ever hope to hang with at a conference in a far flung city, but do not cross her and do not ignore her, and please go back and read her obituaries, which ran for more than a dozen years, creating a community that bridged the sexes, races, and regions and that included both the living and the dead. Steel and fire, humor and heart, and a sly subversive streak. Yes indeed.

When Eliza Bazemore died at either 114 or 115, our honored writer wrote several grafs on the reason her age was disputed and discussed other supercentenarians (as well as a destroyed bible)…but after saluting Ms. Bazemore in fitting fashion, the obit ends with the real reason her age was a mystery: Mrs. Bazemore wouldn't discuss the matter, and always said, "A woman who would tell her age would tell everything."

Our honored writer sent off a teacher of preachers-- a double down holy man, right?-- and without blinking, quoted his associate: "Mance was a hell of a teacher."

And this from the obit of Charlotte Walker, a late-blooming actress. Mrs. Walker's favorite role was that of a woman sitting on a porch in "Murder in Mississippi." "She is asked by the Blair Underwood character if she and her husband would go vote. 'We'll be free when we die,' was her line. In real life, she never missed a chance to vote and had participated in the civil rights movement. In September 2004, she shared her experiences with the massive oral history project, 'Voices of Civil Rights.'"

And here is the part that signifies our honoree, Kay Powell's, special genius. These accomplishments were wonderful, but you don't get an x-ray of our subject's heart until you get this detail: Mrs. Walker was instrumental in having the church's gospel choir on the same film's sound track. Mrs. Walker was fine and she was accomplished, and she took her people with her.

Kay Powell got what people did, but she really got what the women did -- how 99 year old Frances Rossman fought for 10 years to get her neighbor's junk vehicles removed, or how the docent talked her husband into colonial costume, complete with pantihose, and turned him into a candle dipper. Our writer recorded things that wouldn't have been recorded by anyone else, certainly not by her brother journalists, and she filled the pages of a major newspaper, the Atlanta Journal-Constitution, with people we still don't see enough of in newspapers-- more than anyone, Kay Powell has been responsible for fighting the historic sexual imbalance on the obit page. Kay has also helped create and nourish a community of obit writers and obituary lovers that is generous enough to embrace all comers, including my mother, who is a great fan of her martini earrings-- and Kay's community transcends all differences. She has helped give obituary writing a legitimate and respected place in journalism, and she has made us all proud….she is fine and she's accomplished and she takes her people -- that's us -- with her.

And for this, we honor and love her.

And Sister Clem, "who didn't fit the regular nun bill" and "could dispatch a hoagie with ease."

I can re-read their stories a hundred times and never tire of them, these characters who moved out of Philly (and their earthly existence) in the Eighties and Nineties-- my dear dead friends, introduced, summed up, and made unforgettable by Jim Nicholson. He cherished their quirks and measured their immeasurable contributions and laced their portraits with both plain talk and Biblical cadence. (He could also wiggle out of some pretty tight corners.) But most of all he saw. He saw his subjects in all their beautiful and bulbous glory. They had been invisible for so long in the pages of the big city papers, except as victims or perps. Certainly no one outside their neighborhood had ever celebrated them for being "the woman holding up the scenery" or the man with "the patience of a clam." He saw them for who they were. "'I'm not going to tell you a lie. Moose was a drinker.'"

Jim Nicholson gave us a portrait of the blue-collar city, the immigrant city, the black and white city, the individual troops who kept the city working. He buried newsmen with grace and a shrewd eye, like William J. Storm, "Perhaps the greatest 'house-end' reporter who ever worked in Philadelphia." Nicholson explained why knocking on doors after a tragedy to get quotes or material was an important job and a lost art and why Storm was its best practitioner-- he respected his subjects; he was compassionate.

When it came time for Jim to send off a fellow obit writer, he'd make sure there was some news in there to make it truly memorable. Remembering his friend Burr Van Atta, Jr., the obit writer for the rival Inquirer, Jim confessed that he and Burr used to shuffle their pages to make sure every family in Philly who wanted an obit got one. Shocking? Yes, but that compassionate detail guaranteed we'd remember the man.

The same can be said for Nicholson. Nancy Hass, the first of many people who insisted I talk to Jim, used to sit behind him at the Daily News where, for 19 years, he interviewed survivors in an effort to bring their loved ones to life in a portrait.

According to Nancy, "I would hear him speak to families, the regular folk he specialized in writing about, always using that courtly southern-fried voice. Didn't matter who they were, how poor, how weird. One day he was speaking to a woman whose uncle had died. They lived in a particularly lowbrow part of north Philly. All I could hear was his side of the conversation, but that was all I needed.

"'So everyone called him Mooseneck? Hmmm, that's sure an interesting nickname.

"'Okay ma'am, so what exactly did Mooseneck do, I mean, for a living?

"Long pause. Nicholson's head started to bob, and he chuckled long and low. I wondered what he would say to her, what was there to say?

What made him laugh? How did she drink her coffee? How did he keep the shoes in his closet? These were ways to get at the heavier issues about life and death: What did he care about? Who did she love? And how did they find their time on earth? But they were also little brushes he used to add color and shade his portraits. It shouldn't surprise you that he is an elegant painter, a wonderful caretaker, and a loyal and dear friend. Knowing how he works, his laser attention, wholehearted commitment to the subject at hand, that courtly southern fried style-- you don't think he was going to let me get away with just a few stories, do you? No, he hounded me until I got it. I believe it in some quarters, is known as soul.

Jim, in those 19 years, you changed the faces that appeared on the obits page, and you changed our idea of what constitutes the well-lived life. You made your city and your country and the news business proud. And look at all these professionals cheering you, who know just what that took.
Posted by Marilyn Johnson at 8:28 PM 1 comment:

Awards for obituary writing presented at SPOW Convention in Philadelphia 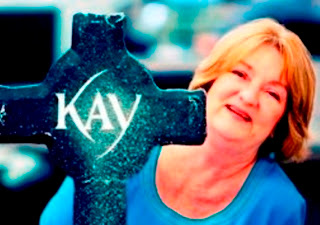 Marilyn Johnson, author of “The Dead Beat: Lost Souls, Lucky Stiffs, and The Perverse Pleasures of Obituaries,” made a surprise appearance at the 2010 Society of Professional Obituary Writers (SPOW) Convention Friday, April 23, 2010, to praise

Jim, who was the first recipient of the honor, presented the award to Kay, who was uncharacteristically speechless.

Receiving top honors in the Body of Work category are Andrew Meacham of the St. Petersburg Times for long-form obits (over 800 words) and Evin Demirel, former Arkansas Democrat-Gazette

obit writer, for short-form obits (under 800 words). Both men were present to accept their awards.

Andrew also won the award for the Best obituary that goes beyond summing up a life for his nontraditional obit for “Hope Witsell,” a 13-year-old girl who took her own life.

Tom Hawthorn won the SPOW Award for Best long-form obit about a well-known figure with his obit for "Frank Williams", which was published in the Globe and Mail of Canada.

Winner of the Best long-form obit about an Average Joe is Ron Hayes, a freelance writer who penned the obit for “Bill Dunn” for The Coastal Star, Ocean Ridge, Fla.

The SPOW Award for short-form obit about an Average Joe went to Sally Downey of the Philadelphia Inquirer. Sally says there was nothing average about her subject, "Hayward Ford," a master gardener. 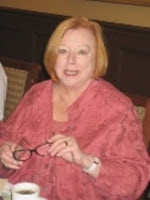 Natasha Gruneberg won the award for Outstanding Radio Obituary for the obit she put together on “Sir Clement Freud” for BBC Radio.
Posted by Alana Baranick at 6:39 PM 6 comments: