"Death Notice" is more than a page turner. It's a page gripper.

A couple of wrong takes on obit writers -- the protagonist is one -- don't mar this riveting mystery. Though, they do promote a stereotype beginning with author Todd Ritter's book jacket bio.

Ritter, pictured here and a New Jersey Star-Ledger reporter, tells us he has "interviewed celebrities, covered police standoffs, and even written obituaries."

Main character Henry Goll, Perry Hollow [PA] Gazette obit writer predictably referred to in the newsroom as Henry Ghoul, is asked, "Do you ever miss being a reporter?"

Goll's response, "I'm an obituary writer. Not a reporter."

Get past a few professional gaffs and get engrossed in this complex mystery where everyone is a believable suspect in small town Perry Hollow's first murder.

Ritter weaves an engaging story with enough of the macabre to have readers wondering if he experienced it himself to add such riveting detail. Was he buried alive? Were his lips sewn together? Has he floated in a pine coffin in a lake? Sniffed formaldehyde?

As journalists and obit writers, we've all had our share of bizarro -- the death notice faxed to obits just hours before the person commits suicide . . . or is murdered. But, would we let our jobs propel us into endangering our own lives?

Just released by Minotaur Books, "Death Notice" is a standout first novel. Read other reviews online and on Ritter's Web page: http://www.toddritteronline.com/. For this review, we wanted to examine how Ritter treats his obit writer. Goll is believable.
Posted by Kay Powell at 1:46 PM 1 comment:

Michael Sorkin wrote an obit for the Oct. 19, 2010, edition of the St. Louis Post-Dispatch about Tim Thornton, a mime known professionally as Tim Angelo, who was exposed to cancer-causing Agent Orange while serving with the military in Vietnam.

Click here to read about the mime's life, military service and simultaneous battles with cancer and the government.

I love the way Michael ended the piece:
In his death notice Sunday in the Post-Dispatch, his family remembered him with the line: "A mime is a terrible thing to waste."

Posted by Alana Baranick at 11:28 AM No comments: 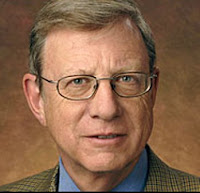 Jeff Greenfield, producer Steve Glauber and a CBS News crew spent the first day of the Society of Professional Obituary Writers (SPOW) convention at the Philadelphia Inquirer in April 2010 to gather information, interview some SPOW members and record conference happenings for a CBS Sunday Morning segment.

Since that time, the CBS folks have conducted more research and more interviews on the subject of obits for the segment. Over the summer, CBS Sunday Morning has focused on covering mostly breaking news stories and rerunning previously aired segments.

Today we were told that the obits segment is scheduled to air on Oct. 31, 2010. Yep! Halloween! Seems kind of appropriate with tombstones and all that jazz, dontcha think?

Set your DVRs to record the show so you don't miss it. But bear in mind that the Halloween obits segment might be bumped and rescheduled for a later date.
Posted by Alana Baranick at 1:30 PM No comments:

A life in clips

The Guardian's obituary of comic film actor Norman Wisdom is brilliantly presented online with written introductions to a succession of clips.

Posted by Tom Hawthorn at 2:26 AM No comments:

Posting faces to go with the names

Tom Hawthorn posted the previous blog item about an obit written by Andrew Meacham for the St. Petersburg Times.

Both men are top winners of Society of Professional Obituary Writers Awards.

Here's a photo of Tom from his own blog, http://tomhawthorn.blogspot.com/.

Cute guys, eh?
Posted by Alana Baranick at 11:50 AM No comments:

An offensive and, it must be noted, idiotic comment by a reader left online for a short news story about the hit-and-run death of a restaurant dishwasher in Florida led the St. Petersburg Times to assign a formal obituary.

Mr. Smith, who was pedaling home from his job as a dishwasher at the Crab Shack, struck his head on a light post.

He was taken to Bayfront Medical Center. He died there six days later. He was 48.

Police have not located the hit-and-run driver.

Shortly after the St. Petersburg Times announced Mr. Smith's death on its website, a reader posted a comment stating the following: A man who is working as a dishwasher at the Crab Shack at the age of 48 is surely better off dead.

Web editors removed the comment, deeming it an offensive and insensitive insult to a dead man's friends and family. Though hardly unusual — check out the comments beneath stories about any recent tragedy — this one spurred the Times to make Mr. Smith the subject of this story, as a reminder that every life matters.

This much is certain about Mr. Smith: A number of people miss him.

He had a small but loyal network of co-workers and friends who are planning soon to celebrate his life.

They all describe Mr. Smith as steady and dependable. He rode his bicycle nearly 4 miles each way from the Hollywood Trailer Park on Fourth Street N to the Crab Shack on Gandy Boulevard, where he had worked for the past 10 years. In a business known for turnover, that is considered a long time.

"I'll probably go through another 10 people to find somebody like him," said Tyrone Dayhoff, 53, the Crab Shack's manager.

He started out busing tables and was very fast, but preferred the shelter of his dishwashing station in the back of the kitchen. He could listen to sports talk radio there.

Amid the steam and the withering heat of the dishwashing machine, he didn't have to make small talk. He liked to sit out back on cigarette breaks, in a plastic chair with his back to the walk-in freezer and facing a wooden fence and beyond it, the Gandy Bridge. Or he rode his bicycle to a nearby RaceTrac station to refill his giant soda cup.

He restocked the shelves with the pots, pans and dishes he had washed, hosed down the rubber mats and swept and mopped the floors. Mr. Smith earned $7.25 an hour, Florida's minimum wage.

Jeff Lackey, who lives across the street from Mr. Smith's address at Hollywood Park, recalled one of the rare conversations Mr. Smith initiated.

"I was coming back from the Dumpster and he invited me over," said Lackey, 53. "He said, 'Jeff, I've worked at Crab Shack for 10 years. I never got a raise or a Christmas bonus. I never even got a card.' "

At the end of his shift — the palms of his hands wrinkled and white — he grabbed two Budweisers from the bar, his unofficial but openly acknowledged gratuity, and pedaled home.

Mr. Smith did not talk much about his past, friends and co-workers said. Both his parents are deceased. Police list Debra Coito of Haverhill, Mass., as his sister. Friends say she was a twin, but that he almost never mentioned her. Records show a Debra Coito in Massachusetts with the same birth date as Mr. Smith's. She could not be reached for comment for this story.

"He set his boundaries," said Peggy Rogers, 56, his roommate of six years. "He didn't pry into your business, so you just kind of respected that and you didn't do that to him."

He told friends he had been married and divorced, had managed a gas station in New Hampshire before moving to Florida in 1999. He got a concession stand job at Derby Lane, then started working at the Crab Shack.

He lived in a mobile home near the restaurant and paid rent to the owner, Bonnie Schaeffer-Mott. Once, when she feared the power company would shut off the electricity, she asked Mr. Smith for help.

He gave her more than what she had asked to borrow and insisted she take it. "I'll never forget that," said Schaeffer-Mott, 51.

Mr. Smith bought his own trailer at the Snug Harbor Mobile Home Park, but home ownership didn't last long. A developer bought the park in 2006, forcing residents out. Mr. Smith and Rogers, then a Crab Shack waiter, moved to two other mobile home parks before settling at Hollywood Park.

He rarely strayed from work or home. On days off he drank a few Budweisers and watched sports, especially his beloved Red Sox, Celtics and Patriots. Rogers wouldn't let him smoke inside, so he sat on the porch with a Marlboro and headphones listening to Aerosmith or Celine Dion.

"Oh, my gaaahhd, she's the best sinnga on the plaaaahhnet," he would say in his New England accent.

He broke no laws, other than a 2007 open-container violation.

Every year, Rogers put up a small artificial Christmas tree and decorated it. "I kind of forced him" to celebrate holidays, Rogers said. She gave him a mountain bike after his was stolen, and bought extra reflectors for his birthday. Because it was important not to wait, she gave him the reflectors Sept. 10, before his birthday.

Two days later, Mr. Smith had nearly finished the bike ride home from work and was just a block from the mobile home park when a car hit his bicycle from the rear in the 7300 block of Fourth Street N. Witnesses reported it was a white or light-colored midsized sedan — possibly a Ford Taurus or Mercury Sable. Police said that Mr. Smith was following bicycle safety recommendations such as wearing light-colored clothing, using reflectors and riding in the bicycle lane.

After examining his wallet, police went to the Crab Shack first, then to Rogers' mobile home. At 11:30 p.m., they knocked on her door.

Dayhoff, his boss at Crab Shack, read the story on the Times website and found himself outraged by unsympathetic comments posted by some readers.

On Sept. 21, Mr. Smith's birthday, Rogers drank one of the two beers he had left in the refrigerator and talked on the phone to Schaeffer-Mott.

Once Mr. Smith's body is cremated, Schaeffer-Mott wants to take his remains to Boston, then New Hampshire. Maybe she will spread a pinch outside the Boston Garden and Fenway Park, where the Celtics and Red Sox play.

Then she hopes to go to New Hampshire and put the rest of his remains at his parents' graves — if she can find them.

She will call Rogers, who will then drink the remaining beer in the refrigerator.

They will toast the memory of a solitary man who knew his likes and lived within his means, a man who could be counted upon.