Jerry Vondas, the feature obituary writer for the Pittsburgh Tribune-Review for 15 years, died on Aug. 20 from an infection stemming from an automobile accident in March. He was 82.

“Jerry chronicled the lives of so many people in the city, from all walks of life,” said Tribune-Review Editor Frank Craig. “His words provided comfort to many families in a time of grief and made him a well-known, well-loved figure in our community. He took great pride in his work, and he leaves a wonderful journalistic legacy.”

Posted by Jade Walker at 5:16 AM No comments:

The Society of Professional Obituary Writers is giving away three copies of "Little Black Trains" by Bob Chaundy on the Kindle.

To enter, send an email with the subject line, Little Black Trains. Include your email address and favorite quote about death or obituaries in the body of the email. You do not have to be a member of SPOW to participate.

Winners will be selected at random from all properly-formatted entries.

Posted by Jade Walker at 3:41 AM No comments: 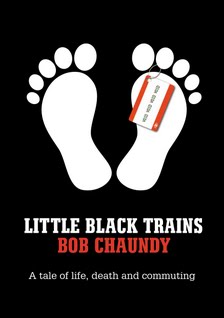 A prominent BBC reporter is murdered in mysterious circumstances. Her colleague, Ben Murray, has to produce her obituary for that day’s TV news bulletins. Ben commutes each day by train with another obituary writer, Steve Graham from The National Herald newspaper. Listening to Ben’s stories convinces Steve to move from sport to obituaries at his paper. Despite their shared profession, they differ in the subjects they choose. While Ben deals with the famous, Steve prefers the Morris dancer who performed before The Queen with a ferret down his trousers or the singing bus conductor. Sometimes Steve includes more details in his obits than is good for him. One thing they agree on, though, is that obituaries are about life, not death.

Among the odd characters they and their clique encounter on their daily commute is an old woman they call The Crone. One day, Steve spies her in the street and decides to follow her out of curiosity. As a result, he becomes accidentally embroiled in a web of murder and intrigue that sucks his friends in too and provides him with plenty of material for his weekly obituary column.

During his two decades at the BBC, Chaundy produced hundreds of obituaries for television and the Web, so he has the inside track on what it really means to be an obit writer. "Little Black Trains" is his debut novel, and one he describes as "by far and away his best."

Posted by Jade Walker at 3:33 AM No comments: