Brilliant job in the Hartford Courant:


Wonderful obit about a longtime Florist To the Presidents who also played excellent practical jokes. Once tied a parachute to an over-inebriated pal, then phoned police to report that something fell out of the sky and landed in his back yard.
Posted by Claire Martin at 11:31 AM No comments:

Ruth M. Siems, a retired General Foods home economist who helped develop Stove Top stuffing, died Nov. 13, close enough to Thanksgiving to have her obit run across the country while folks are doing prep work for their holiday feast.

I love this kind of thing. It's not that I wish people to die. I just appreciate it when a person's death seems to have been orchestrated to have the obit run in conjunction with a holiday or a happening in the news.

Like politicians who die around election day. Veterans memorialized around Memorial Day. Football players who kick the bucket during college-bowl season or the NFL playoffs.

Margalit Fox, an excellent obit writer for The New York Times, penned the Siems obit distributed by the NYT wire service. I suspect many newspapers will run the obit Thursday. I love that Margalit used the stuffing-lady's death as an excuse to write the history of Stove Top stuffing, although it did come off somewhat like a press release for Kraft Foods.

She got a great quote from Laura Shapiro, author of "Something From the Oven: Reinventing Dinner in 1950's America." Shapiro said, "Stove Top made it possible to have the stuffing without the turkey, probably something no cook would ever have dreamed of but people eating Thanksgiving dinner might well have thought of: 'Take away everything else; just leave me here with the stuffing!' It's kind of like eating the chocolate chips without the cookies."

And Margalit threw in an ironic fact. There are several stuffing recipes online for making Stove Top stuffing from scratch. Bravo, Margalit!

Also interesting: The inventive home economist was not survived by a husband or children, suggesting that she was not an old-fashioned happy homemaker. I don't know whether she never married or if she outlived a spouse and kids.

And Siems died of a heart attack at 74. I wonder whether her heart condition was related to her diet.
Posted by Alana Baranick at 10:37 AM 1 comment: 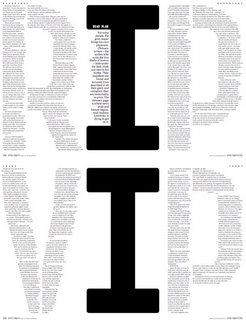 With humble and profound apologies to all, the British literary magazine Zembla has just published my own take on the Obituarists Association conference in Bath.

It's a rewrite of a piece a wrote a year ago for a small American fanzine, and has been marinaded in poetic licence before being liberally sprinkled with over-exaggeration.

The layout's rather marvellous; the text a little more silly. The article itself is over at my website. Don't hurt me, I'm not worth it.
Posted by Andrew Losowsky at 7:22 AM 2 comments:

please do yourself a favor and read jim sheeler's veteran's day project for the rocky mountain news. it's titled "a final salute."

for the last year, jim and a photographer have been following a marine, whose job includes knocking on the doors of the families of service people who died in iraq.

the narrative shows the featured marine and other officers bearing bad tidings to widows and parents, bringing the fallen marine home for the funeral and staying with the fam through the agony of it all.

and it's done in typical jim-sheeler fashion with remarkable sensitivity, keen observations and fabulous writing that makes veteran reporters wish they could be as good as jim sheeler when they grow up.

you can access the in-depth story, including photos, at:
http://www.rockymountainnews.com.


find the icon for "a final salute," which is a photo showing a marine's white glove, and click.

you can get the text through nexis too, but, as of friday, the last page wasn't all there.

don't forget to have an amply supply of tissues or hankies handy.
Posted by Alana Baranick at 8:23 AM 3 comments:

this is your life

let's take a minute to remember ralph edwards, the tv host who used to surprise celebrities and unsung heroes by calling them by name and saying, "this is your life."

his televised biographies of people we all knew and those we'd never heard of were kind of like obituaries. we should make him our patron saint.

and for those who don't remember ralph edwards, be watching for the new "this is your life," hosted by regis philbin. the creation of the new show was announced on cable news a couple of days before ralph edwards' death.
Posted by Alana Baranick at 10:18 PM No comments:

I would really like to write about this woman, almost exclusively on the strength of what her daughter wrote in the paid obit. The decedent is a member of the Ute Mountain Ute tribe in SW Colorado.

"She was the owner of probably the most famous Indian car," said her daughter, Marjorie Borst.
"She hit horses, cows, skunk and deer. When her driver's license was taken away, she said, 'They clipped my wings.'"

I picture miles of unfortunate animal carcasses in her wake.

In a related vein: Am I the only obit writer here who receives emails from funeral directors whose communiques are adorned with animated smileys? I can only imagine what the families think when they open an email from this place. It make an excellent detail in a novel though.
Posted by Claire Martin at 5:12 PM 1 comment: