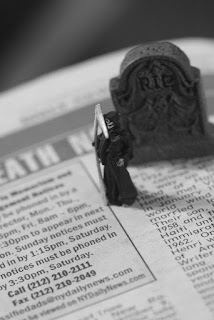 The Society of Professional Obituary Writers is currently accepting entries and nominations for outstanding obituary writing published in 2016-2017.

The contest offers awards, affectionately known as The Grimmys, in the following categories:

* Best obit of an ordinary Joe/Jane

* Obituary writer of the year


Reporters and editors from all over the world may submit entries to the contest, which will be blind-judged by a panel of society members. Trophies will be awarded to the winners at ObitCon 2017, the society's biennial conference.

ObitCon will be held Oct. 13-15 at the Legacy.com offices in Evanston, Ill. The event will feature discussions and professional development workshops for writers on the death beat.

WATCH: If You're Not in the Obit, Eat Breakfast

Posted by Jade Walker at 7:04 AM No comments:

They Died (Or Did They?) 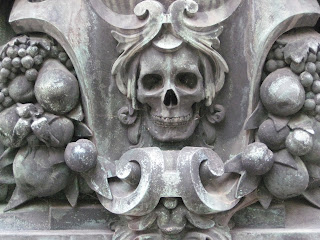 One of the things that drive obituary writers mad is euphemisms for death. Following AP style, journalists should use the words "death," "dead" or "died" in their stories. The deceased does not "go with God," "follow Jesus home," "cross the Rainbow Bridge" or "pass away."

Some euphemisms still make it into print, especially in paid death notices, and now there's an Instagram account devoted to them. Check out They Didn't Die here.